Don't mess with a female cowbird.... 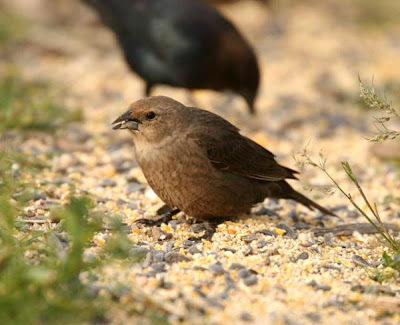 This from Science Daily:

Cowbirds have long been known to lay eggs in the nests of other birds, which then raise the cowbirds' young as their own.

Sneaky, perhaps, but not Scarface.

Now, however, a University of Florida study finds that cowbirds actually ransack and destroy the nests of warblers that don't buy into the ruse and raise their young.
Jeff Hoover, an avian ecologist at the Florida Museum of Natural History, is the lead author on the first study to document experimental evidence of this peeper payback -- retaliation to encourage acceptance of parasitic eggs.

Findings will be published online in the Proceedings of the National Academy of Sciences March 5.

"It's the female cowbirds who are running the mafia racket at our study site," said Hoover, who has a joint appointment with the Illinois Natural History Survey. "Our study shows many of them returned and ransacked the nest when we removed the parasitic egg."

You can read the rest of the article here
Posted by Warren and Lisa Strobel at 12:36 PM