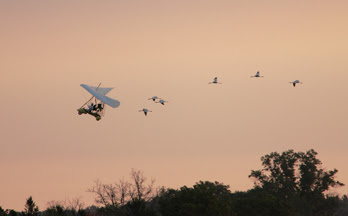 NPR has the background story of Whooping Crane 15 (referred to as Crane No. 615 by Operation Migration) who survived the Florida storms last week.

"Kind of an independent bird," Duff said, describing No. 15. "On the migration south, he was a bit of a problem. He kept dropping out."

"That bird was lost on the migration just at the Florida-Georgia border. It dropped out, and we tried to track it, but we couldn't find it. It was actually discovered two days later."
No 15 came across the Florida border by truck, not by air.

Another whooping crane chick did not drop out and successfully made its historical fall migration without the assistance of an ultra-light. Wild601, guided by parents #211 and #217, is the first whooping crane hatched in the wild in Wisconsin to migrate to Florida in over 100 years. Love it!

Posted by Warren and Lisa Strobel at 6:12 PM