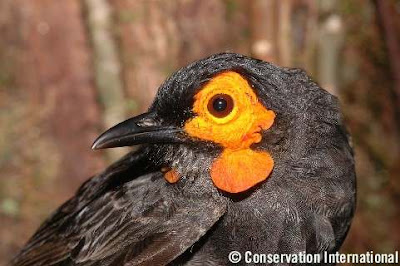 We're very fortunate to have this lecture of international importance by Dr. Bruce Beehler coming to our little city of Annapolis. If you live locally, please try to make it!


DISCOVERY OF A LOST WORLD
A FASCINATING TRIP TO AN UNDISCOVERED GARDEN OF EDEN
You, your family and friends won’t want to miss naturalist Dr. Bruce Beehler’s amazing presentation of the incredible discoveries in the remote, mist-shrouded jungles of New Guinea’s Foja Mountains. Come and see this vivid account of what few humans have seen. New species of birds, frogs, butterflies, palm trees, and flowers are discovered, tame tree kangaroos and echidnas that you can pick-up and hold, a long-lost species of bird-of-paradise rediscovered!

This inspiring adventure story made headlines in 500 newspapers around the world and was covered on Nightline, CNN, NBC Nightly News, BBC, and PBS’s Lehrer’s NewsHour
You can attend Bruce Beehler’s vivid accounting and presentation of photographic footage of this journey of discovery on Thursday, March 15, 2007 at 8:00 p.m. at Quiet Waters Park's Great Blue Heron Room in Annapolis. Dr. Beehler will present his amazing story of adventure documented in the press worldwide of his DISCOVERY OF A LOST WORLD: A FASCINATING TRIP TO AN UNDISCOVERED GARDEN OF EDEN.
Dr. Beehler, Vice President of Conservation International’s Melanesia Center for Biodiversity Conservation, led an expedition of 12 researchers from the U.S., Indonesia, Holland, and Australia to Indonesia’s remote, mist-shrouded Foja Mountains located just north of the vast Mamberamo Basin of north-western Indonesian New Guinea in Papua province. This pristine, remote area covers more than two million acres of old growth tropical forest with no trails, no sign of civilization, no sign of even local communities ever having been there. The expedition to one of the most remote, pristine jungles in Asia found 20 new species of frogs, 4 butterflies, 5 new palms, and new species of flowers. These new discoveries included what may be the largest rhododendron flower on record, almost six inches across and a new frog species was a tiny microhylid frog, no more than ½ inch long.
The first bird seen at their remote jungle camp was a new species: a Wattled Smoky Honeyeater with a bright orange facepatch, the first new bird discovered on New Guinea since 1939. The team spotted 15 of these birds. This new species has received a scientific name for Dr. Beehler’s wife, Carol.
The team captured the first photos of a male Berlepsch’s Six-Wired Bird of Paradise, named for the wiry strands that extend from its head in place of a crest. The amazed scientists watched as a male Berlepsch’s Bird of Paradise performed a mating dance for an attending female in the field camp, the first time a live male of the species had been observed by Western scientists, and this proved that the Foja Mountains was the species’ true home, after several earlier expeditions failed to find its home. The scientists also took the first photos of the Golden-fronted Bowerbird displaying its bachelor pad to females as part of a mating ritual.
Large mammals that have been hunted to near extinction elsewhere were located in abundance, and such rare species as Long-Beaked Echidnas, a primitive egg-laying mammal, and the Golden-mantled Tree Kangaroo, an arboreal jungle-dweller new for Indonesia and previously thought to have been hunted to near extinction. Both species showed no fear of humans and could be picked up. 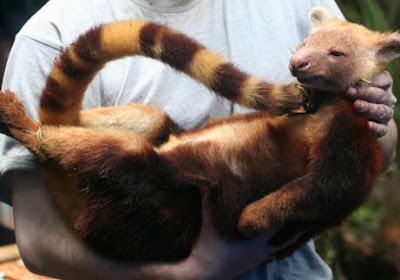 Bruce Beehler first conceived of this incredible journey of discovery in 1987 when on an earlier expedition to New Guinea he flew over the Foja Mountains and noticed a patch of flat, open ground in the jungle suitable for a helicopter landing. Nineteen years in the conception and planning phase, the rented missionary helicopter dropped Bruce and his team on to the boggy patch of ground that would serve as their exploratory base camp for two weeks of discovery. Dr. Beehler hopes to return this year with a crew from 60 Minutes to continue the explorations and discoveries in the Foja Mountains and document new species on film.
Dr. Bruce Beehler, a native Marylander who resides in Montgomery County, is an ornithologist, birdwatcher, and tropical ecologist, and an expert on the ornithology of the Southwest Pacific and South Asia. After conducting pre-doctoral and doctoral fieldwork in Papua New Guinea, he worked for 10 years at the National Museum of Natural History, followed by stints at the Wildlife Conservation Society, U.S. Department of State, and Counterpart International. Today he oversees a field program that conducts conservation initiatives in Fiji, New Caledonia, Solomon Islands, Papua New Guinea, and Papua-- Indonesia. Dr. Beehler is author or co-author of several natural history books: Birds of New Guinea (Princeton); The Birds of Paradise (Oxford); A Naturalist in New Guinea (Texas); and A Biodiversity Assessment for Papua New Guinea (Biodiversity Support Program).
A $5 DONATION IS REQUESTED AT THE DOOR
Posted by Warren and Lisa Strobel at 1:46 PM