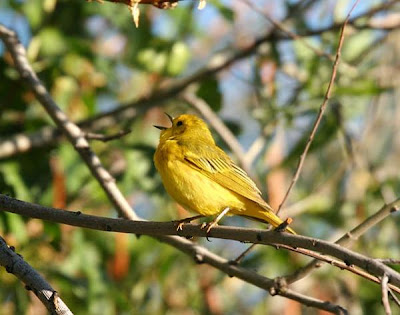 I am a yellow warbler. I am very bright and I can sing. Ladies, here I am....
Photographer: Dave Herr
The second season of Miyoko Chu's Songbird Journeys: Four Seasons in the Lives of Migratory Birds was just as crazy enjoyable as the first section.
Chu begins the summer with the story of Wally, a nine year old banded yellow warbler who returns each summer to Lake Erie. Wally travels over two thousand miles for the chance to mate and raise young. He spends the first part of summer using his voice to entice females and protect his territory. Researchers found that not only is the repertoire of songs important, but also the way the bird sings. If a song sparrow wants to duke it out with another male song sparrow, he matchs the song type of his rival.
Wally is also wearing his most colorful plumage of the year, which is vital to Wally's chance of spreading his genes. Females prefer the brightest, most colorful males as these traits are often tied to the males who find the choicest diet. Some birds such as cardinals and finches get their bright colors from the pigments in the fruits and seeds they digest.
Once Wally finds a mate, she will build a nest and Wally will bring her food several times an hour as she warms the eggs. Once hatched, Wally and his mate will devote themselves to the feeding (hundreds of time a day) and protection of the brood (cowbirds delight in dropping their eggs in nests to be raised).
Wally might be surprised to find out the not all of the nestlings he is tending are his own. However, there is a pretty good chance that Wally spread his genetic material to another nest around the corner. DNA studies have shown that only 14% of songbirds are monogamous. Bad Bird Couples!

Chu then takes us to the New Hampshire summer. Dick Holmes, a Dartmouth College biologist, has studied songbird population fluctuations for over 35 years. "The story that Holmes and his colleagues have unraveled is complex; the fortunes of birds are governed by local, regional, and global factors that are constantly in flux."
Bird populations vary due to the abundance of caterpillars, deciduous tree seed production, wind changes over the oceans, acid rain and landscape change due to our alterations.
Whatever the cause, Holmes' studies show that songbirds have decreased almost 60% over the past 30 years.
Chu ends the summer with instructions on how to find and watch breeding birds and where to report your findings. There are also some wonderful illustrations with notes on where songbirds breed and winter.
Note to Cute Husband - our Wood Thrushes are either in Mexico or Central America right now!
Posted by Warren and Lisa Strobel at 8:06 PM