Ducking in the cold 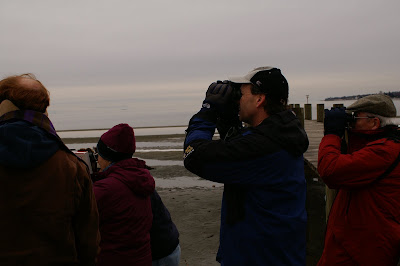 Warren and I joined our local birding club for an outing to several spots along the South River and the mouth of the Chesapeake Bay. The weather has been crazy warm through most of December and January, but Sunday was cold and you could almost smell the snow in the air.

Highlights included small rafts of Common Goldeneye, Surf Scoters, Lesser and Greater Scaup and being close enough to over 100 Tundra Swans to hear their quavering "WOO-OO-WOOO".


The snow started at our second to last stop where a group of about 25 Black Duck were congregating. Black Ducks in that number were quite a treat because the number of breeding pairs in the Chesapeake Bay continues to decline. Unlike their close relatives, Mallards, Black Ducks are shy and wary and require isolated marshes safe from predators and human disturbance to nest. Unfortunately, along the Chesapeake Bay, only a few, small, nesting islands remain.


As we shivered in the snow at our last stop, we nabbed our final species of the day, a small group of the duck formerly known as Baldpate, the American Wigeon. The lighting was not great, but we did hear the males' whistle, which sounds very similar to a squeaky toy.

The grand finale of the day was soup and chili at the home of our generous group leader and his lovely wife, who put up with a bunch of birders tracking snow and mud in her home. While the fire was stoked and we warmed up, the discussion revolved around the lackluster numbers of ducks seen this year versus last. The Northeast's warm winter seems the blame for our lack of visiting ducks. Why travel farther if the weather is cooperating further north? One of the many fine birders who joined us filled us in; duck migration is largely due to the influence of colder weather, whereas, songbird migration is triggered by increases/decreases in daylight.

The final bird sighting of the day was a lone silhouette of a Great Blue Heron standing in the dark on the dock as the snow came down. Nice!

Photo Quiz: Who am I dropping shellfish on the pier to crack them open? Or maybe the question should be.... why would anyone post such a cruddy picture? 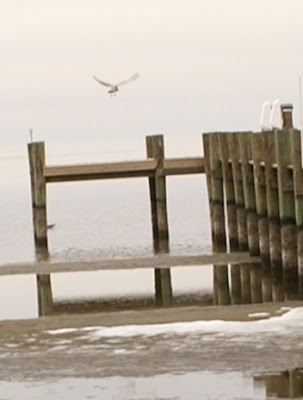 Posted by Warren and Lisa Strobel at 5:41 PM