First, I've been to Iraq six times. Four of those were before the war, when Saddam Hussein was still in charge. Remember when President Clinton almost bombed Baghdad in November 1998, but pulled back when Iraq let UN weapons inspectors in? I was there then. Remember when Clinton did bomb, a month later, in Operation Desert Fox? I was there then, too. (Thanks, US Air Force, for missing my hotel). I've also paid two brief post-invasion visits with Secretary of State Colin Powell and current SecState Condi Rice. But I can't say I've covered the conflict as a war correspondent...

Second, my Iraq bird list stands at exactly two: House Sparrow and Mesopotamian Crow (a subspecies of Hooded Crow, which may someday be split into its own species).

It might seem odd or even selfish to write about birding in Iraq with all the carnage there, and the suffering of both Iraqis and Americans. But I got to thinking about this issue with the announcement that BirdLife International and an Iraq nongovernmental organization have published a field guide to Iraq's birds in Arabic. (For you listers, it covers 387 species recorded in Iraq). 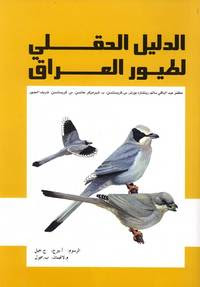 A few thoughts come to mind: War, as terrible as it is on humans, ravages the natural environment as well. And Iraq and its environs have had their share of ecodisasters, from Saddam's draining of the southern marshes, a unique and historic habitat, to his dynamiting of nearby Kuwait's oil wells, which burned for months (I know - I saw them).

That's sad, because nature humanizes us, makes us whole. One thing I've learned about conflict is that even amid chaos and violence, life goes on. Life can be perfectly normal one minute, and horrifying the next. And vice versa. People still try to raise children, shop, go to school, and even, in places, do normal outdoor activities. Hunting with birds of prey is an ancient tradition around the Persian Gulf, for example.

Whatever happens in Iraq, it will some day be peaceful again. And traditions like that will start up. And wildlife - including birds - will be around to make life better.

Even in wartime, they can make life a teeny bit better. At least they did for one U.S. soldier, who chronicled his off-duty birding in a lovely little book, Birding Baylon. 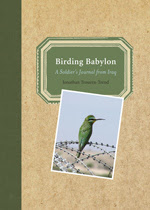 Comments welcome. But please not about the war. There's plenty of other places to debate that and, as a professional journalist, I have to stay objective. - W

Posted by Warren and Lisa Strobel at 8:55 PM