Probably not a good idea to enrage a crow...

According to a new study published in the latest Proceedings of the Royal Society B, Crows remember the face of someone who mistreats or threatens it.

Researchers wore a unique "dangerous face" mask as they captured and banded and released crows around Seattle.  The researchers then drove to different areas wearing the mask.  Crows that had never been banded recognized the "dangerous face," and started mobbing and scolding the researchers.  Both relatives and strangers joined in the scolding and mobbing, which could occur over a mile away from the original banding.


So, through some sort of social media, the captured crows spread the word about the dangerous masked banders and all their crow friends joined in on the payback.

This I believe, as crows are known as very intelligent creatures and probably do have access to Facebook.
I did, however, find this very disturbing:
"...other social, long-lived species that live closely with humans might also share information in a similar manner. Possibilities include animals such as coyotes, raccoons, gulls, pigeons and rats. All could practice a combination of social and trial and error learning."

The raccoons that I throw water on and scream at to get off the bird feeder are possibly imprinting my mean girl behavior and spreading the word to their buddies.

They could be planning a counter offensive as I write....

Clearly, I need to get start wearing a disguise around the LoveNest.
Posted by Warren and Lisa Strobel at 8:37 AM No comments: Links to this post

.. and they use them, as Roger Tory Peterson is supposed to have said.
Well, these Black-Bellied Whistling Ducks used their wings to fly from the south-central and south-western US all the way to Patterson Park in urban Baltimore.  Lucky for us! 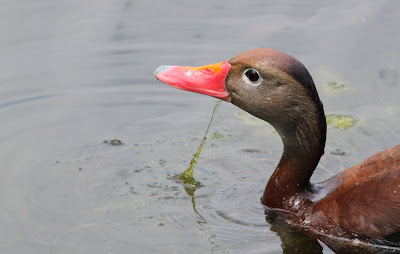 And lucky they landed in a relatively small pond, where we could get great looks at their crazy plumage and easily snap photos. 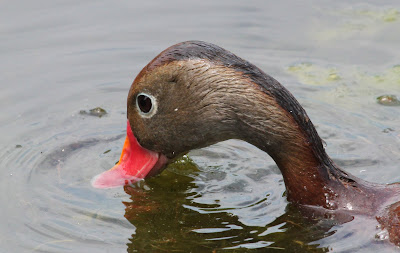 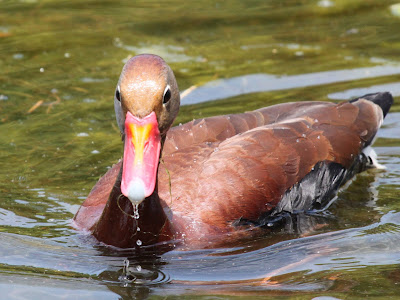 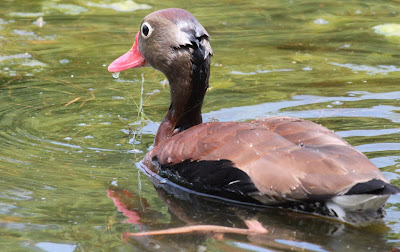 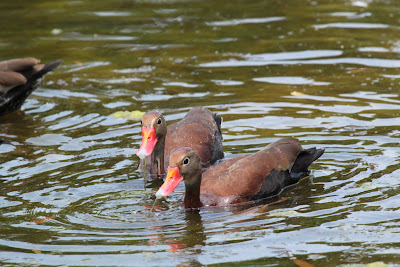 We deduced that the bird in the background must be Mama Duck, watching over her 4 young 'uns. 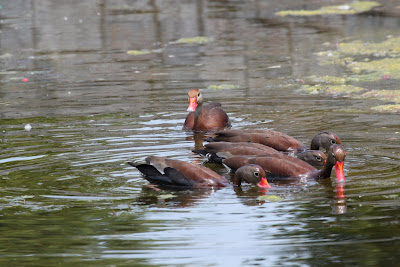 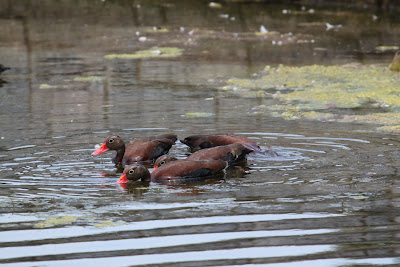 We don't know what brought you here, Black-Bellied Whistling Ducks, but we are super glad you stopped by. Safe travels! 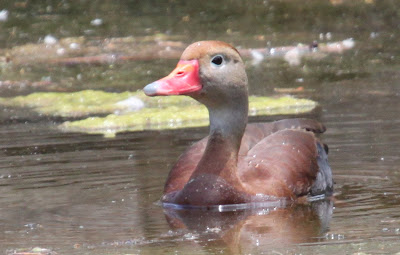 Posted by Warren and Lisa Strobel at 7:02 AM No comments: Links to this post

The link to the live nest cam is here.

As of today, when she flies off the nest, you can see one egg and one chick.    You can also see how fast her little heart beats even as she just sits on her nest.


Big thanks to Patty for turning us on to this....
Posted by Warren and Lisa Strobel at 8:58 AM No comments: Links to this post 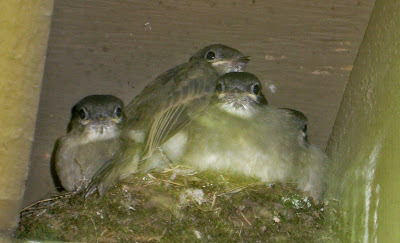 Birdcouple was out hiking on the Appalachian Trail on Memorial Day weekend with youngest son Adam and his girlfriend Katherine. We heard (more than saw) some really nice birds - a drumming Ruffed Grouse, a hooting Barred Owl, trilling Veerys and Wood Thrushes, not to mention singing Cerulean Warblers, Ovenbirds and Redstarts. A very noisy woods it was!

Eastern Phoebes are nowhere to be heard in the woods, but we often find that when we arrive at one of the small wooden shelters set in the forest along the trail, a Phoebe family is not far away, using the eaves as a place to nest. Wonder where Phoebes nested before humans came along to build them bridges and roofs to use?


These Phoebe babies (say that five times fast!) were nestled under the corner of the Priest Shelter (elevation 4,000 feet) in Virginia, close by a stream over which mom and dad were no doubt catching insects for their breakfast. Princess will soon write about our hiking adventures over on our AT Blog.
Posted by Warren and Lisa Strobel at 8:46 PM No comments: Links to this post

Honored to be included...

Dawn Fine, compiler of http://www.birdingblogs.com/ included some of our best BirdCouple posts in one of her recent posts.  Click here to check it out.

We are beyond honored to be included in one of  Dawn's crazy fun blogs.

Look for a post on our AT site this weekend.  We got religion on the Priest over Memorial Day weekend!