Birdcouple was ABOUT done with cold birding by mid-March. But we had one more task ahead of us: a pelagic boat trip to the Atlantic Ocean waters off the coast of Ocean City, MD, looking for seabirds. It promised to be interesting, adventurous and COLD. 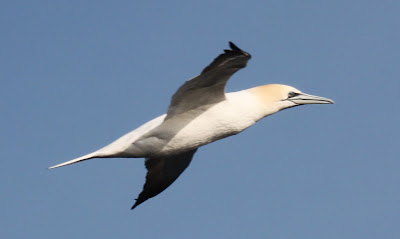 Northern Gannet
In case you were wondering what the Atlantic Ocean looks like in March, thanks to Birdcouple you don't have to go and look for yourself: 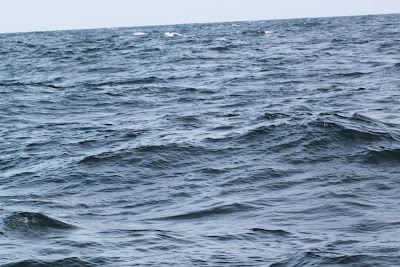 Dan Haas was on the lookout for an elusive Skua! We didn't find one, but Dan got a decent enough picture of a shearwater to confirm it was a Sooty Shearwater, a lifer for many of us onboard. 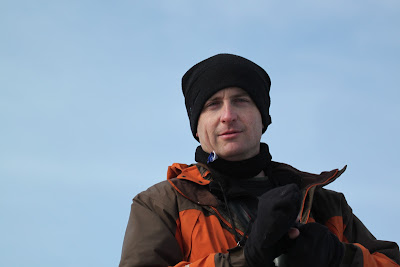 What with birds disappearing behind waves, diving and flying off, and the boat lurching back and forth, Brrrrrrrrrrrrrrrr-elagic photography can be a challenge. This is the best Warren could do with a nearby Razorbill: 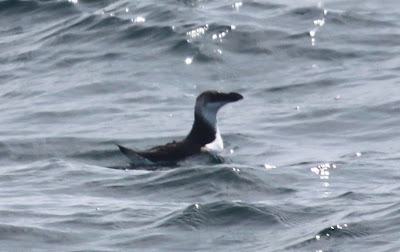 As we pulled back in towards port and poured the last of the chum overboard, gulls flocked about our fine ship, the Morningstar. This one reminded us of a certain Alfred Hitchcock bird movie: 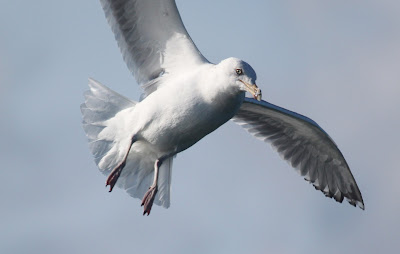 Others seemed to dance along the water: 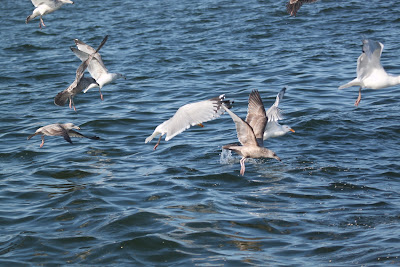 Even Herring Gulls can be pretty sometimes: 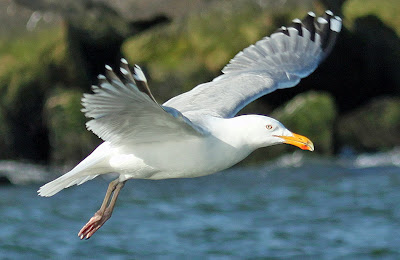 Our last birds of the day were a pair of Laughing Gulls at the OC Inlet parking lot. We tried to turn them into Franklin's Gulls. Dan wasn't buying it. 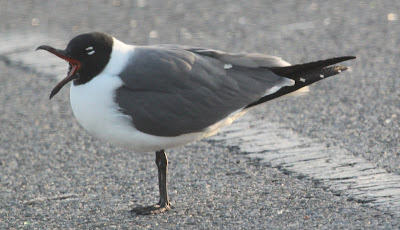 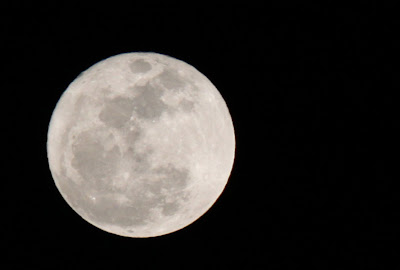 The moon on Saturday was the most hugest in 19 years, due to its closer-than-usual proximity to Earth. We, along with good buddy Dan Haas, happily found ourselves in Ocean City, Md., preparing for a pelagic birding trip the next day.
We wandered on the beach for awhile, enjoying and photographing the moon, and the moon-lit waters of the Atlantic Ocean. And then it was early to bed, for a 5:30 a.m. dockside call for the boat. More on our seafaring birding trip soon... 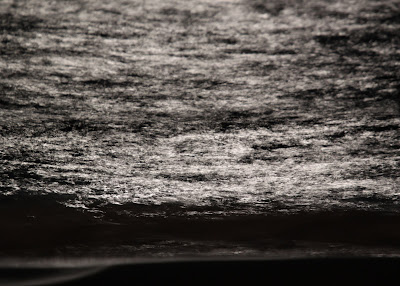 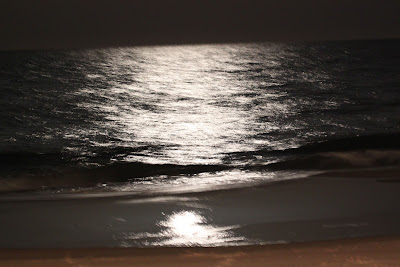 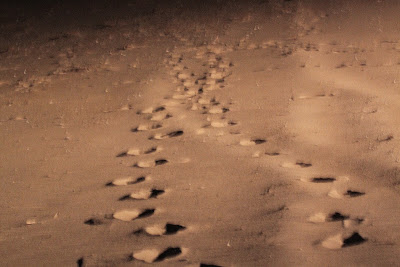 Posted by Warren and Lisa Strobel at 10:24 AM 2 comments: 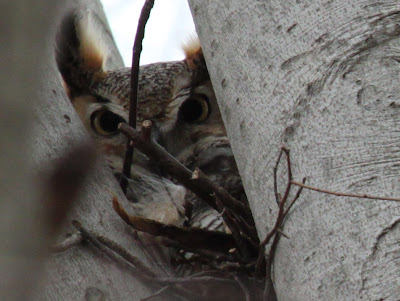 While a lot of bird species, especially our neotropical migrants that arrive from parts south each April and May, nest in the spring and early summer, not all do. This Great Horned Owl, found at an undisclosed location, was already on her nest in the second week of March, and her eggs should hatch soon. According to the Cornell Lab of Ornithology's All About Birds website, the clutch is normally one to five eggs.

The site goes on to say that the Great Horned Owl "typically takes over nests in trees made by other bird species. Often puts nest in hollows or broken-off snags in trees." That's doubly true here. This owl's nest is an a hollow, and it was the site of a Red-Shouldered Hawk's nest last year. 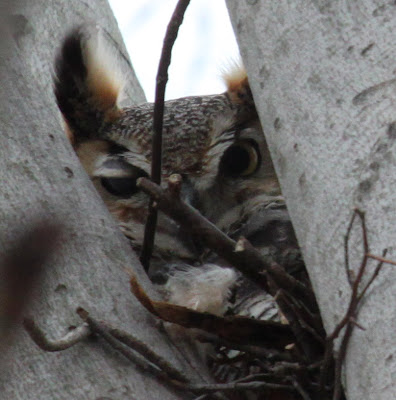 Killdeers have quite different nests, typically a shallow depression scratched out of the ground. Some have even been found nesting on flat, gravel-covered roofs of low buildings. Here's a fact from Cornell we didn't know:  "After egg-laying begins, Killdeer often add rocks, bits of shell, sticks, and trash to the nest. Curiously, these items tend to be light colored, and this tendency was confirmed in one experiment that gave Killdeer the choice between light and dark sticks." 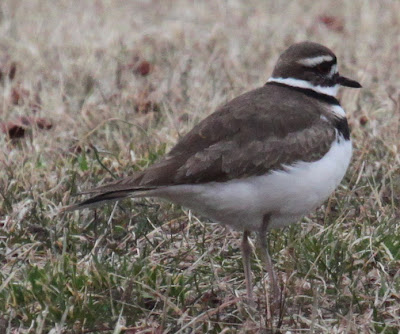 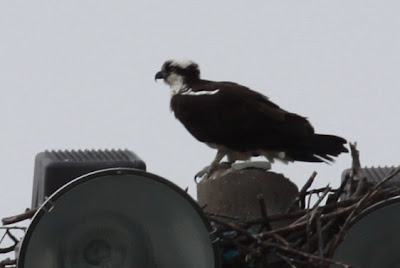 On the same day Birdcouple saw Mrs. Owl, Princess indulged Warren's burning desire to see his first Osprey of the year. We made a side trip to Anne Arundel Community College where, according to a resident nearby, the Osprey has just arrived.

So, the Owl family is already underway, the Osprey are just getting started in the baby-raising business, and the warblers, tanagers, orioles and flycatchers won't even be here for a couple more weeks. Always something going on in BirdWorld.

Happy homesteading!
Posted by Warren and Lisa Strobel at 10:29 AM 3 comments:

I would much rather endure 110+degree weather than 30-degree weather.  I am a cold weather wuss!  I am always the first to return to the car and crank up the heat and wait until Cute Husband waves me back outside because he has found something good in the scope.  Which reminds me of something else I won't miss about winter birding...

Dragging around the scope!

Our scope is not standard spring bird gear.  Warblers are often closer than ducks on a body of water and ducks stand still better for scoping.   In fact, when Cute Husband asked me to get the scope out of the back of the car this weekend, I am ashamed to say I gave him a bit of the side eye...
Stupid awkward scope that likes to bite into the side of my neck while I tote it about.

Layers upon layers of clothing!

Yes, completely related to Freezing! and caused by Freezing!, yet different.   This relates to the winter birding nuisance of dressing to get out of the car and undressing once entering the warmth of the car.  Actually, only Cute Husband does this, I stay completely layered throughout the entire birding adventure, as my perfect temperature is 80 degrees.

What I will miss about winter birding....

Ducks tend to hang out long past sunrise and passerines tend to remain active through much of the day (probably because they are Freezing!), which generally allows for a leisurely wake up.  Not in the spring- the early birder gets the bird- daybreak is best for warblers and peeks at other migrants. 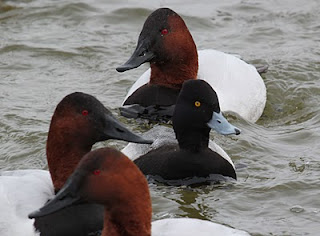 Hooray! It is going to be above Freezing! every day this week in Annapolis!
Posted by Warren and Lisa Strobel at 9:48 AM 1 comment:

Laura Kammermeier has been creating a series of hilarious, and very pointed, bird-related animated shorts on her blog. Her latest, The Coffee Contradiction, touches on one of our favorite subjects. Our dear friend Paul Baicich is credited with an assist on this one.

... and for our readers in the Annapolis-Baltimore-DC triangle, a gentle reminder not to miss tomorrow night's annual Heise lecture at Quiet Waters Park in Annapolis. Live African Penguin included. Always a great event, and an important fund-raiser for our own Anne Arundel Bird Club.
Posted by Warren and Lisa Strobel at 5:46 PM 1 comment: 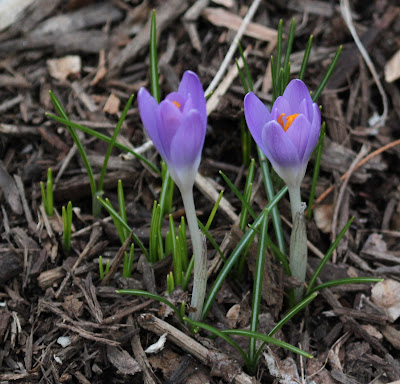 This has to be Birdcouple's favorite post each year. We don't care that the calendar says there are still two weeks to spring. We know that it's sprung.


And these lovely purple crocuses (croci??) in Lisa's garden aren't the only sign. In our area, large flocks of geese and other waterfowl have been seen heading north. Osprey, recently arrived from South America, have begun to be spotted here and there. Yesterday, we saw Tree Swallows twittering and diving near the Potomac River, and heard an Eastern Phoebe doing its fee-BEEE! thing.

Come on flower blossoms and warblers! Soon....
Posted by Warren and Lisa Strobel at 10:06 AM 3 comments:

Plus, I love winter duck and gull searching, as it usually does not call for an early Saturday morning wake-up.

We go to the non-red-necky area where the Red-necked Grebe had been spotted. We searched and searched through Ring-billed gulls and a few lingering Lesser Scaup without any luck.  I spent some time trying to turn an American Crow into a Raven and then we drove to the other side of the river to see if the Grebe might be paddling about over there.

But, Cute Husband spies an unusual partially hooded gull.  It was pretty far out and we couldn't make out the color of the bill.  Black-headed Gull made some sense, but he seemed to have too much white on his forehead to match the plate in our field guides.

We moved on, as after all, we were next going to a spot where a Black-headed Gull had been seen a few hours before.

And, not for lack of trying.    Dipping twice made for a somewhat sad birding adventure.

By the time we got home, someone had posted a sighting of a Black-headed Gull at the Grebe site!

The poster of the sighting is a really good birder and was only able to solidify the ID after the bird flew.

So, I've been nagging Cute Husband about counting it as a needed year and Maryland bird.  My argument is that he would have counted it if we had been there when the bird was ID'd by someone else.  He found the bird and recognized it for its different-ness.  He called it a Black-headed Gull and I was the one that wasn't convinced.

Count it- darn it!

Maybe.  But, not until he checks it out again tomorrow morning....
Posted by Warren and Lisa Strobel at 5:29 PM No comments:

2 much wrk, not enf play

With world events being what they are (do things ever slow down?), Warren has been working TOO much lately, as has Lisa The Princess. Hey, we won't complain about steady paychecks. But birding time has been grabbed in between long weeks, amid short weekends. Maybe the Middle East will CHILL OUT when spring comes to North America and the migrants arrive? Doubt it.

There's almost no such thing as bad birding, tho, and Birdcouple has had some pleasant experiences recently, as we always do. (We won't discuss that Black-Headed Gull here). Here's a few pix: 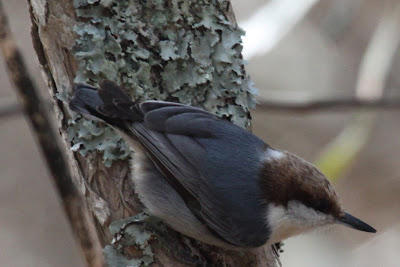 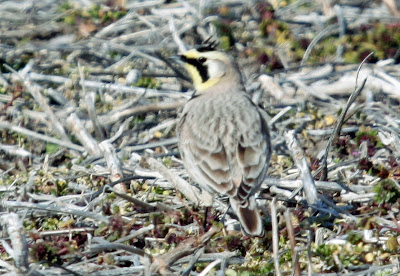 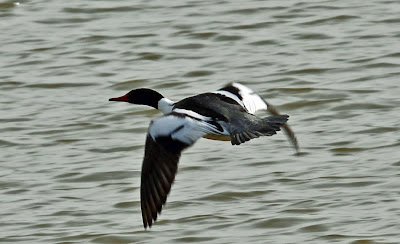