Birders should be excited about a big-screen birding movie based on a hilarious, much-beloved book, starring a bevy of famous actor-comedians, right? Right?

Maybe. We loved Mark Obmascik's The Big Year,  the tale of the 1998 Big Year contest between Sandy Komito, Greg Miller and Al Levantin. The book captured the seriousness and hilarity of a contest to see more species in North America than anyone else, and it deftly portrayed the three completely different personalities of the men involved.

Well, the movie is due out next year, perhaps in May, and it stars, among others, Steve Martin, Jack Black and Owen Wilson. 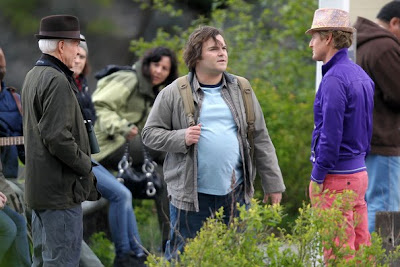 BC "guest contributor" Paul Baicich recently emailed us some photos and other information about the upcoming movie, which we understand has completed filming and is in post-production.

Here's a movie industry precis:   Three obsessive bird watchers go off on their "Big Year," duking it out to spot and record the highest number of species in 1998--the year El Nino brought an unprecedented number of species to North America. During the course of their wild, ultra competitive adventure, the guys learn that there just may be other things more important than winning.

We'll reserve judgment until we see the movie itself, or at least the trailer. But popular culture has a really bad record when it comes to portraying the reality of birders and birding (to the extent it ever does), and we hope the movie dispels caricatures, while entertaining, rather than reinforcing them.

Here's another pic, of the filiming of a pelagic birding scene. 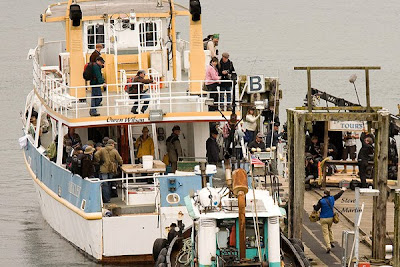 Also courtesy of Paul B, here is a recent interview with Al Levantin.

More on this over at the Birdchaser.....
Posted by Warren and Lisa Strobel at 5:13 PM

Oh, I loved this book and I did not know they were making it into a movie! When I first read this book shortly after it came out I was not such an avid bird watcher and I did not even know people did this kind of thing! I had never even heard of a "Big Year!" This book was fun AND an education for me. My oh my how I have changed! I hope they actually do a good job with this movie.

I think All birders will be pleased with the portrayal of our passtime, hobby or obsession, as you see it. I was fortunate to be a background performer for the shearwater cali trips shot out of Tofino for a week, and the Attu chapter which took place over a week in Vancouver on a soundstage and a week on the dempster north of Dawson. I have been on Shearwater trips and to Attu and It was amazing to see the details, the little things. It is easy to surpass Jane Hathaway as a role model and I think the production will be very solid. rt

rt - thanks for the comment and the info. We hope you are right!

The Audubon Club on Kelleys Island Ohio was pleased and excited to have Mark (the author) speak at a couple of our pot luck dinners. We loved having him and he loved coming here because we have been designated an Important Birding Area and because we are on the migration path for so many birds.
Leslie (www.KelleysIslandStory.com & www.KelleysIslandNature.com)