The American Ornithologists' Union has decided to split the well-known (and quite cute) Winter Wren into two species, according to Birder's World magazine's Field of View blog.

The western variant of the Winter Wren is now recognized as a separate species, the Pacific Wren. This is fabulous news for those of us who have seen the WIWR on both the Pacific and Atlantic coast. We get a new life bird and ABA bird (#492 for Warren) while sitting on the figurative couch.

Hope you did too.

Check out the Birder's World post for other information on taxonomical and nomenclature changes. Wow, that last sentence almost sounded scientific.
Posted by Warren and Lisa Strobel at 9:40 PM 2 comments: Links to this post 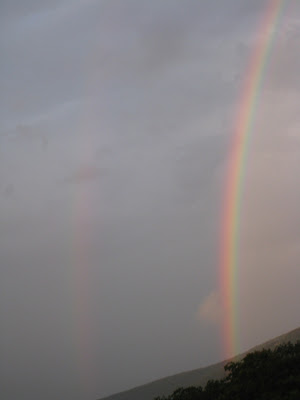 Lisa and I were full of anticipation for our next major Appalachian Trail hike of the year, three days in New York state. We never know what we'll find on the trail, but when we saw this double rainbow after a storm swept through Bear Mountain, we knew it was an omen of good times to come. The brighter rainbow on the right made an arc across the entire horizon, seemingly touching the Earth at both ends. Lisa said she had never seen a complete rainbow in her entire life.

Lisa is posting all about our recent hikes on BC's Appalachian Trail blog. Suffice to say, we walked, climbed and stumbled 43+ miles, heading south from the famous Dover Oak to Bear Mountain, just across the Hudson River.

As always, we had some great--and surprising--birds along the trail. A goofy-looking immature Black Vulture at a rocky outcropping in the woods, we noisy humans having just scared one of its parents away. A female Wild Turkey as we entered the clearing where we were to camp on the second night. A pair of Barred Owls hooting and a-hollering in the same spot less than an hour later. Three Bohemian Waxwings, the first we've seen in a long time, and a sure sign that we are advancing northward along the AT. And American Redstart, a Veery serenading us, and the usual cast of Pileated Woodpeckers, Red-Eyed Vireos and Scarlet Tanagers.

Our hike ended at Bear Mountain Zoo, which only exhibits injured animals that could not survive alone in the wild. (It's also the lowest point, elevation-wise, on the AT).

Some of the signs and exhibits were charmingly old school, like this display: 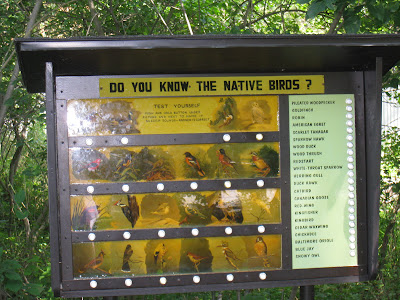 We enjoyed reading about the "Duck Hawk," the "Sparrow Hawk" and the "Canadian Goose."

The latest in our occasional round-ups of bird- and nature-related news.

In case you hadn't heard, the American Birding Association has fallen on hard times. More on this from Kenn and Kim Kaufman's blog and The Drinking Bird blog.

A likely Orange-Billed Nightingale Thrush has been seen and photographed in South Dakota of all places. What is a Central American bird doing up on the Great Plains. If confirmed, this would be one of a handful of North American records of this species.

We've blogged before about the 'lost' Large-Billed Reed Warbler. According to the BBC, scientists have now found the first confirmed breeding location for the species, in Tajikistan.

And we should note and celebrate good environmental news when it happens... According to this report, there has been a major decline in illegal logging worldwide over the last 8 years.

That's it for now. Until next time...
Posted by Warren and Lisa Strobel at 7:43 AM No comments: Links to this post

That's Great, It Starts with an Earthquake, Birds and Snakes...

No, it wasn't quite the end of the world, but Maryland did have a baby 3.6 magnitude quake this morning.

Cute Husband and I were sound asleep when it suddenly felt like a truck had hit the house.  It was 5AM and it stopped so quickly, we just rolled over and enjoyed the next 1/2 hour of sleep before our dueling alarms went off.

Warren was off for an early start with the boys for some potential shorebird action.  Perhaps, the sudden release of energy from the earth's crust caused some rare bird to appear!

I'm ready for a sudden release of weekend fun! 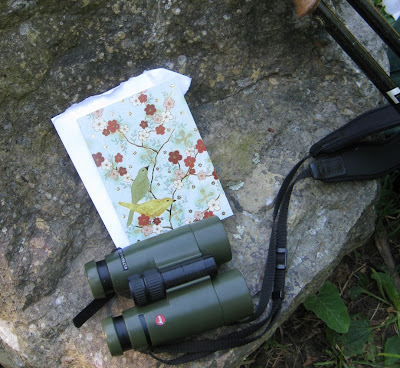 I took my honey for a little surprise hike on Saturday, our 6th Anniversary. There was a little 2 1/2 mile stretch of the AT that we had not yet done along Skyline Drive  in Shenandoah National Park, Virginia. What better way to celebrate a half-dozen wonderful years of marriage to Lisa -- especially if there was a yummy, romantic dinner awaiting us afterwards?

Well, we can now say, with no fear of contradiction, that we have hiked every mile from the Tye River in central Virginia to the Hudson River in New York, plus some more miles south along the AT in Virginia.

On Saturday, BC being BC, we did a little birding. Came up with oodles of Towhees, a nice male American Redstart, a pair of Hooded Warblers (heard but not seen), and our first Blue-Headed Vireo of the year.

Driving along Skyline Drive en route home, Lisa and I came upon stopped traffic - lots of cars and motorcycles pulled to the side. We feared an accident had occurred along the narrow, windy road. But no - everyone was looking at a healthy bear 50 yards away in the forest. It had sat down, unperturbed by all the human activity.

Too cool! Here's to 60 more years of love, fun and adventure, Princess!
Posted by Warren and Lisa Strobel at 1:04 PM 3 comments: Links to this post

BC just got back late Monday from a two-day, 21.7 mile hike on the Appalachian Trail in south-central Virginia, just north of Roanoke... Best bird was a Whip-Poor-Will serenading very close to our tent as dawn approached... Heard lots of birdies in the mid-summer woods, but only saw a few, including nice look at a male Scarlet Tanager who cooperatively flew in close.

Please check out Lisa's incredible post about her first AT hike after the "Wilson Incident." Wow, is W crazy for that lady!!

Back on the bird front, the Washington Post has a lovely, sad article about the heart-rending choices facing bird rescuers in the Gulf of Mexico. Wonderful pictures, too..
Posted by Warren and Lisa Strobel at 9:43 PM 1 comment: Links to this post

This is the note Cute Husband left me yesterday..... 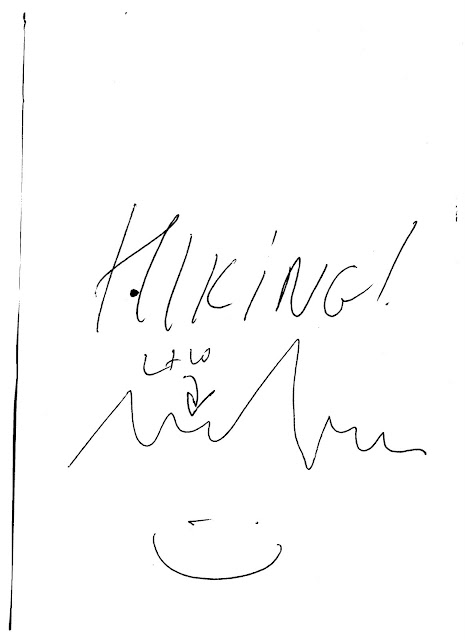 Yes, we are off tomorrow for our first AT hike of 2010!   100 miles per year on the Appalachian Trail is the goal and somewhere deep in the woods of  Virginia is the first step in that goal as we reach toward a total of over 700 miles completed.

HIKING :)
Posted by Warren and Lisa Strobel at 5:36 PM 2 comments: Links to this post