I love that man! He brings home the best goodies!


A larger thistle feeder, a peanut feeder and tons of bird food!

An irruption of winter finches from Canada's northern parts are being reported at feeders not too far from our love nest.

Now with a total of 9 feeders filled to the brim with a variety of bird treats, the yard is bustling with winter bird action.

A Pine Siskin could come in for a snack at any time.
Or, perhaps, a Common Redpoll might drop by for lunch.
Who knows? Maybe a White-winged Crossbill might pop by for supper. 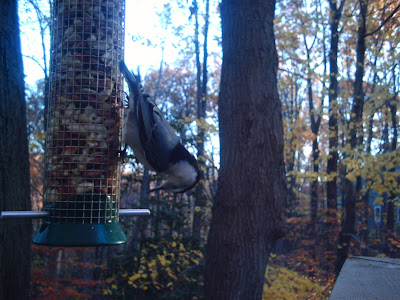 White-breasted Nuthatch getting a peanut fix 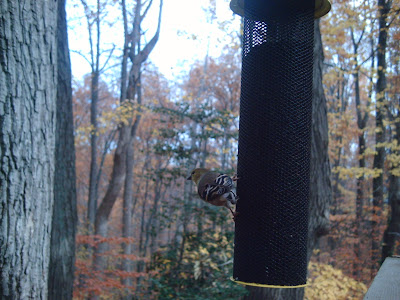 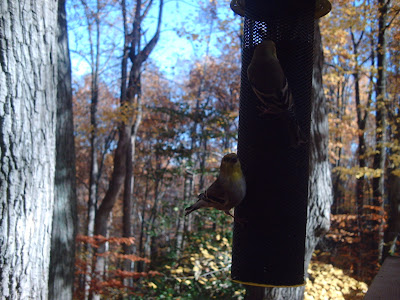 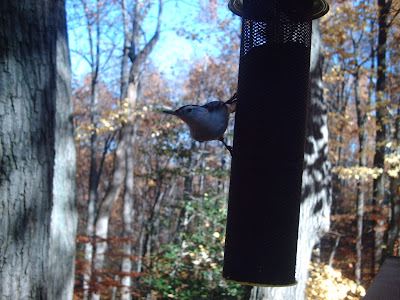 White-breasted Nuthatch hanging out on the thistle feeder 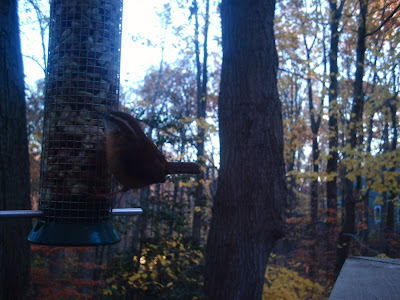 Carolina Wren working the peanut feeder.
Posted by Warren and Lisa Strobel at 10:59 AM 2 comments:

BirdCouple. com was born!
We are in the midst of preparing for the Mid-East Peace Conference to ascend on our little town of Annapolis this week and hoping that something wonderful comes from it all.. 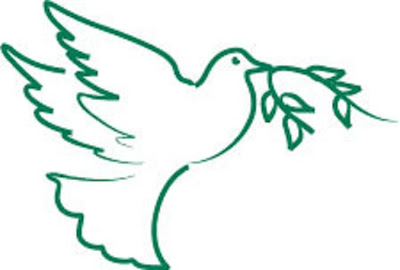 But nothing could stop us from recalling the date of today.

Warren and I conceived of our little plot on the big web one year ago today in hopes that we would learn more about birds and perhaps, in that process, pass along something new or thoughtful to some random reader of our little blog.

So what happens after one year of posting?

Well.... we met some wonderful people, who happen to bird, who taught us much about birds, conservation and the environment.
We became more than birders. We became engaged birders.

And, I hope we have a passed a little of this to you during the past year.
Posted by Warren and Lisa Strobel at 9:23 PM 2 comments:

Our Name in the Big Lights

It is obviously just a matter of time before BirdCouple's name and blog is known throughout the land....

Bart Stephens, maker of our prized possession and favorite toy, the BirdCam, mentioned BirdCouple (us! yes! us!) in the same paragraph as David Sibley . 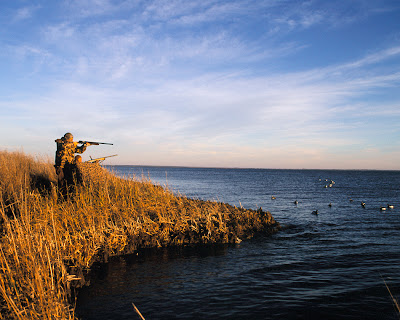 The November issue of my favorite piece of mail, National Geographic, has a piece on hunters and the part they play in wildlife management.

The article features a picture of the first Duck Stamp (1934-1935), an ink drawing of Mallards by J.N. "Ding" Darling. (Dang! I wish this inaugural stamp was part of my Dad's collection of Duck Stamps)

In February, we blogged about a similar article in the The Washington Post that discussed the decline of hunters in Virginia. The decline in hunting in Virginia is mostly due to the loss of open space for wildlife, which also means less open space to safely fire a gun without hitting a Walmart or a subdivision.


The decline in hunting was also due to cultural shifts in how we spend our free time.

In the last few decades the sport of hunting has also been heavily criticized by animal rights advocates.

According to National Geo, "The great irony is that many species might not survive at all were it not for hunters trying to kill them."


Since 1934, the Duck Stamp (which serves as a hunting license) revenue has added 5.2 million acres to the National Wildlife Refuge System. Hunters also pay excise taxes on guns and ammunition. Some of this excise tax revenue is used to buy new public game land, thereby preserving habitat.


Hunters also contribute $280 million yearly to nonprofits such as Ducks Unlimited who focus on restoring and conserving habitat. Habitat that benefits the game, but also other indigenous plants and wildlife.


And, they are paying for the privilege of hunting.


As the number of hunters decline each year, the revenue generated by their sport is also declining.


On the other hand, the number of wildlife watchers continues to grow, with bird watching being one of the most popular.

As birders, perhaps it is time we pay for the privilege of enjoying our sport.
You can do that by purchasing a hunting license (the Duck Stamp) and supporting non-profits who are dedicated to conservation.
Posted by Warren and Lisa Strobel at 6:39 PM 1 comment:

Bird Savior or Cat Killer ... or both?

UPDATE: On Friday, according to the Associated Press, Mr. Stevenson's trial ended in a mistrial, with the jury unable to reacha verdict.


Here's one sure to generate controversy. Our dear friend Paige Bowers passed along this New York Times article about James M. Stevenson, the founder of the Galveston Ornithological Society in Texas. He's in court after having deliberately shot a feral cat that was terrorizing the rare Piping Plover, which occur on Galveston Island.

There's apparently some debate about how "feral" the cat was. BirdCouple can't condone the method used, but if it comes down to cat vs Piping Plovers, we side with Plovers.

Sorry, Vencka.
Posted by Warren and Lisa Strobel at 10:28 PM No comments:

The Washington Post has a fascinating article this morning about the results of a study in which Smithsonian Institution scientists put up motion-sensitive cameras along the Appalachian Trail to see what critters are about when we're NOT hiking. (And we ARE hiking as often as we can.....)

Result: White-Tailed Deer, elusive Bobcat, more Black Bear than expected, even Coyote. But none of the hoped-for Eastern Cougar, believed to be extinct.

Interestingly, the closer the Trail got to exurban areas, the more Opposum and Raccoon were about.

The Post webpage also has a great gallery of shots from the cameras. For more on the AT, check out our AT Blog.
Posted by Warren and Lisa Strobel at 4:55 PM No comments:

Long time, no blog. Birdcouple has been BUSY!

We were glad to see that Lisa's testimonial about BirdCam made it on the main page of Wingscapes' Web site. Check out what we and others have been saying about this really cool toy. Christmas is on its way, after all.

Last Sunday, we headed down to Blackwater NWR with our friend, artist-musician-birder Dan Haas. We went hoping to spy a Red Phalarope that had been spotted there (a very rare bird inland) as well as some American Avocets. As seems to happen so often, we missed what we were looking for, and found something else. 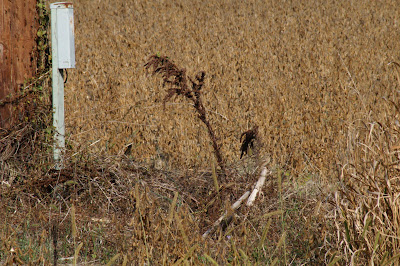 There he is, right there. See him? 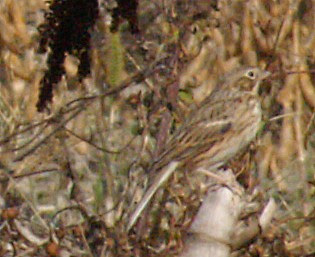 Ah, that's better. A very pretty, if well-hidden sparrow - and a lifer for BirdCouple! This was Warren's 220th species seen in Maryland.

Blackwater National Wildlife Refuge, in Dorchester County on Maryland's Eastern Shore, is a really special place. It wasn't very birdy on Sunday, but we did see a Red-Tailed Hawk chase a Merlin off some carrion. Cool. Also, this turtle was neat: 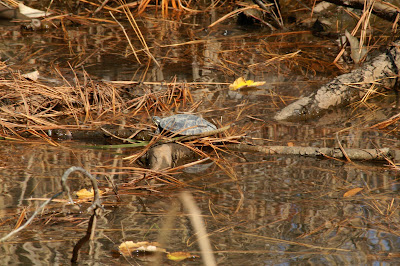 And we found a lone Tundra Swan, sitting by itself far away from its bretheren. Probably needed some Chill Time. 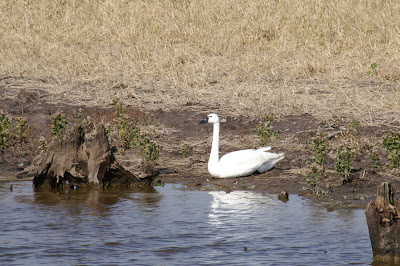 Photographing birds in flight is hard. Warren is still working on it: 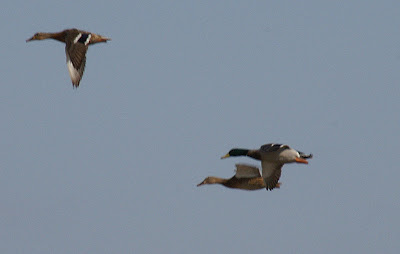 Birds sitting still, like these Double-Crested Cormorants and Forster's Terns are much easier: 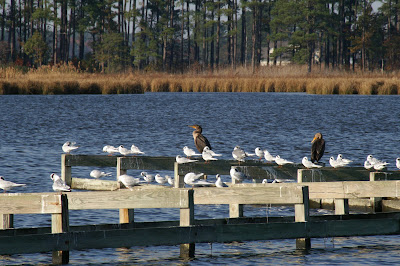 Ahh, the open road, a scope, Lisa my love and good friends. What could be better? 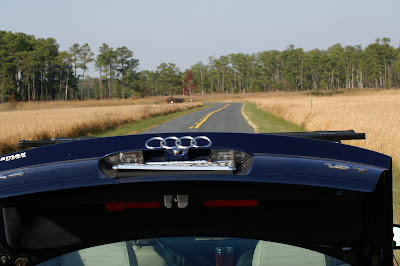 Posted by Warren and Lisa Strobel at 10:57 AM 2 comments:

Most of this pile of junk mail and catalogs is made from virgin timber from Canada's Boreal Forest. 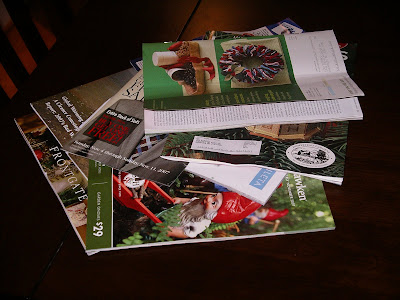 Canada's Boreal Forest is over 1 billion acres stretching from Alaska to the Atlantic. Almost half of all bird species in the United States and Canada rely on the Boreal Forest Region for survival.

Large scale logging to produce paper for junk mail, catalogs, tissue and toilet paper is one of the direct threats to the Boreal Forest Region's ecosystem and the birds that breed there.

So, my new mission is stop receiving bits and pieces of the Canadian Boreal Forest in our mailbox each day.

I call the "to order" number on each catalog that travels to our address and ask to be taken off their mail list.

I thank the responsible companies that use recycled paper.

And, I tell the poor person who answered the phone about the remarkable Boreal Forest and how vital it is to birds and how this wilderness helps to mitigate the affects of global warming....

Perhaps word of the Boreal Forest bird freak will travel throughout all the world's call centers. The call centers will meet and discuss how inefficient my tirades make their operators.

All the call center operators will know about the threat to the Boreal Forest!

Call center operators will go on strike demanding that all catalogs and junk mail be made from recycled materials.

Or, maybe, all call center operators will demand training in processing only online orders. Catalogs will become extinct!

See! One person can make a difference. Now, off to make some phone calls....

Posted by Warren and Lisa Strobel at 7:31 PM 2 comments: