The birding couple saw the Tropical Kingbird - Maryland's first-ever - on Dec. 30. Some amazing pictures, by Bill Hubick, are here:

A good lesson here for all birders chasing rarities on other people's property. There was a lot of communication with the property owners, telling them why a crowd of birders was showing up, pointing bins, scopes and cameras at their house. They have been welcoming, and all the bird-crazy folk have been respectful of the property and neighbors. As it should be....

W
Posted by Warren and Lisa Strobel at 10:36 PM No comments: 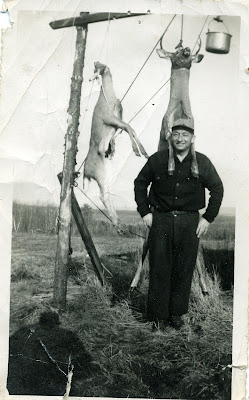 A great man passed away on 2/27/06. He helped me buy a car when I was 17 and he later fixed it when I forgot to put oil in it. He showed me how to peel a peach with a pocket knife and he taught me that everything could be described with one simple word: "whatchmacallit". He smiled when we heard the song of a wood thrush from his porch and he loved my grandmother.
In March, Warren and I bought and sold a house. Our new love nest came with raccoons, possums, fox, mice and over an acre of warbler woods.
Old backyard. 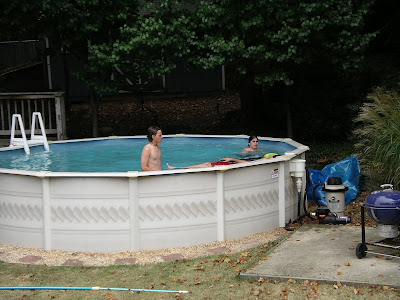 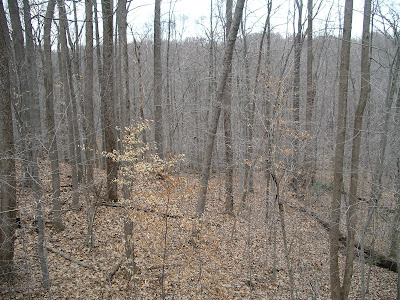 Our first 1/2 marathon - 2 days after we moved 50 million boxes. Warren would have won the race if we hadn't agreed to finish together.

I celebrated a big b-day in March. My parents gave me bees to try my beekeeping skills for the second year in a row.
Warren gave me Florida and birds....Swallow-Tailed Kite and Roseate Spoonbills in the Everglades. Black-whiskered Vireo on the way to the Keys. Antillean Nighthawk in Key West Brown Noddy, Black Noddy, Masked Booby in the Dry Tortugas.
If you are looking for a great guide and a fun ride, Larry Manfredi is genius in Florida: 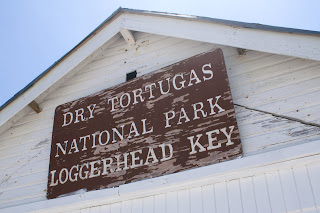 In June, we had the pleasure of Peter Kaestner staying with us for the weekend.
Peter has over 8,000 birds! 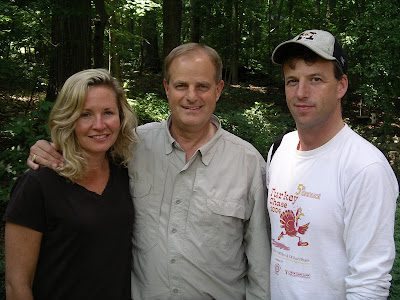 Warren and Peter are writing the greatest work of man and bird kind. 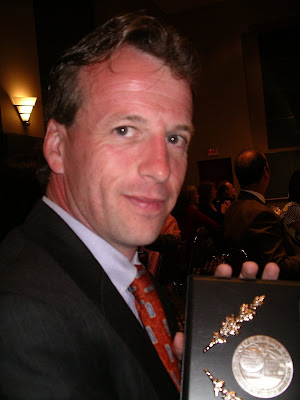 Warren received praise throughout the year for his work My Babe is not only a great birder, but also a great journalist:

MR. JOSEPH: Senator --SEN. BIDEN: ... I have two other questions if you mark that one down to respond to --the budget. The other one is that -- I'd also like -- I'm going to submit an article to you you've already seen, February 7th, "State Department sees exodus of weapons experts," Warren Strobel, first-rate well-known reporter here, Knight Ridder. I have questions off of that I'll submit for the record I'd like you to be able to respond to.

He is such a star, he even gets hate mail!

Warren, Your story fails to mention over 500 missiles have been found. Saringas does not deteriorate. Perhaps we should put a few milli-liters in your home to see if it still is letal. Thanks for continuing to spread propaganda, be responsible for killing our soldiers because you live with a jack-ass behind your name ratherthan an elephant. SUPPORT OUR TROOPS, BACK HAND A REPORTER! TJR


In May, we did a personal Big Day that included two states and the District of Columbia. We totaled 83 species with highlights including Olive- sided Flycatcher, Mourning Warbler and Yellow-throated Vireo. And, a load of miles on the car.

In July, we took Mitch and Adam to the San Juan Islands for a three day kayaking/camping trip. We had great views of Rinocerous Auklet off the ferry to Friday Island, celebrated when we saw a flock of Northwestern Crows and finally positively nailed a Purple Finch. The highlight of the trip was spending 5 days with two fine young men. 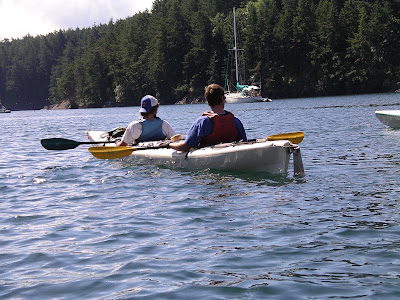 In the Fall, Mitch and Warren celebrated Mitch's birthday in the most insane way. Warren counted no birds on his way down. 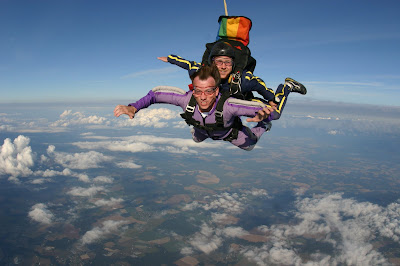 In 2006, the first man I ever birded with fights and beats cancer and the amazing woman he married was by his side the entire time. My Dad never took me on any official birding observations with binoculars. But he did take me goose hunting and for walks in the woods where he would point out animal tracks and unusual plants. Just recently, he took a leaf from a tree on our neighborhood to try and determine species. Curiosity, what a wonderful trait. Thanks Dad. 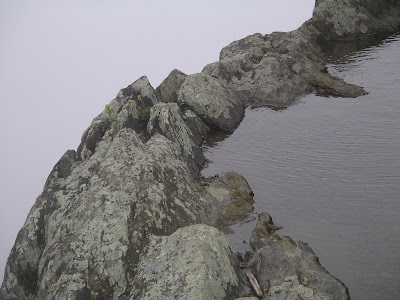 Posted by Warren and Lisa Strobel at 1:34 PM 1 comment: 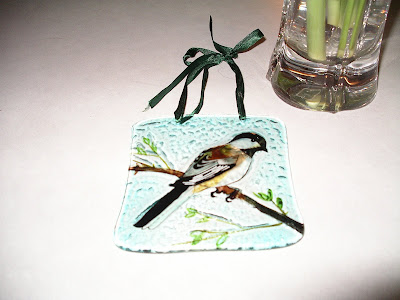 It is a little hard to tell if this is a Black-capped or a Carolina, but he is all mine now. The neighborhood holiday party was big fun and included a "steal a gift" exchange: http://en.wikipedia.org/wiki/White_elephant_gift_exchange .

Warren selected lucky number 17. At number 6, Mr. Chickadee was opened by a lovely elderly woman. Once I laid eyes on him, I knew he would be mine. I could barely listen to the ongoing gossip that surrounded me as I watched numbers 7-16 open new gifts without stealing anything. Our turn! Well, I guess MY turn, as I totally forgot to ask cute husband if he would have preferred some other trinket like the holiday candles or the blue vase . I gently, yet firmly tugged him from lovely woman and assured her that better gifts existed under the tree (as if). The game rules allowed for only one steal. Victory was mine! Oh, how numbers 18 - 24 cried that they all wanted him! All tried to bully me into giving up Chicky for some lousy frame or cheap bottle of wine (we brought that).

Being new to the neighborhood, I promised to hang him in a window where everyone could see from the road; as long as they didn't come in our yard.

Posted by Warren and Lisa Strobel at 12:07 PM No comments: 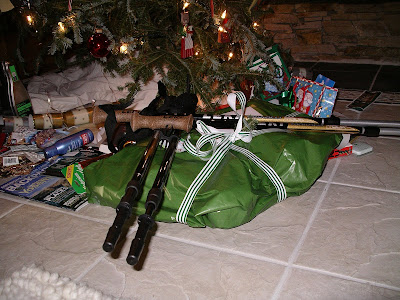 Here is the ton of loot Warren and I received/gave each other for Christmas. Note the hiking poles. Neither of us asked for them. Oddly, we both got each other a set. Naturally, cute husband gave me the top-of-the-line sticks and I got him the middle-of-the-roads.
All this new hiking gear and goodies is torture in mid winter. I used my new poles to walk around the house. Next time I'll add some rocks for more realistic PA AT hiking.
Posted by Warren and Lisa Strobel at 11:42 AM No comments:

Dip - That's Birder-talk for going after a big bird and missing it. I made a mad, 5-hour, 200-mile dash yesterday from our home in Annapolis to try to see a Tropical Kingbird (usually a resident of say, Arizona) that had been spotted in southeastern Maryland. It would be the first record of this bird in our home state. That map on the right (courtesy of Cornell Lab of Ornithology) shows the normal range of Tyrannus melancholicus in the United States - the top of the small orange area.

Well, others were at the site where it had been reported and had seen it that morning, but it didn't return in the afternoon. Am I upset? Hell, no. It was a fun chase! And I was only 30 minutes late for a dinner party back in the 'hood.

Warren
Posted by Warren and Lisa Strobel at 5:08 PM No comments: 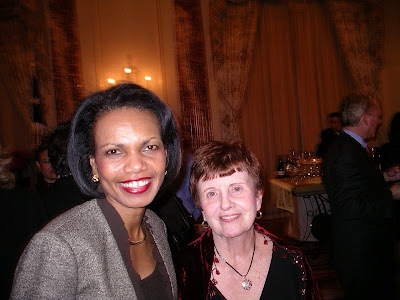 Okay, okay - This has *nothing* to do with birds, we know. But we couldn't resist posting this photo of my Mom with the Secretary of State at last night's holiday reception for the State Department press corps.

Merry Christmas
The Bird Couple
Posted by Warren and Lisa Strobel at 5:13 PM No comments:

PARIS, Dec 7 (Reuters) - Birds are delaying their annual winter migration to Africa from France because of the unseasonally warm weather, a French bird protection group said on Thursday.

The autumn was the warmest in France since 1950, with temperatures 2.9 degrees Celsius (5.2 F) above seasonal norms, the national weather agency has said.

"Long distance migratory birds -- those that spend the winter in tropical Africa -- seem to be particularly late in leaving this autumn," the League for the Protection of Birds said in a statement.

The league's network of birdwatchers have spotted swallows all over France, including in the north, as well as warblers, which usually leave in August or September.

"This phenomenon is just another sign that we are seeing rapid and major climate changes that the birds are having to face, especially the migrators," it said.

Bird migration patterns can change over time but the league said it wondered whether they would be able to adapt quickly enough to the rapid changes in climate.
Posted by Warren and Lisa Strobel at 5:57 PM No comments: 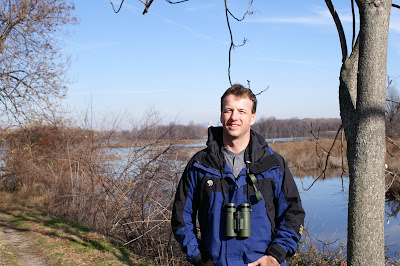 How lucky am I to be married to this hot birder?

Philly was so much fun! Birds galore... right outside the big city. Highlights included Green Winged Teal, Glossy Ibis and my fave... Rusty Blackbirds! Treated ourselves to a CheeseSteak at Geno's....Hey! we birded for 4 hours!

Posted by Warren and Lisa Strobel at 9:57 PM No comments: 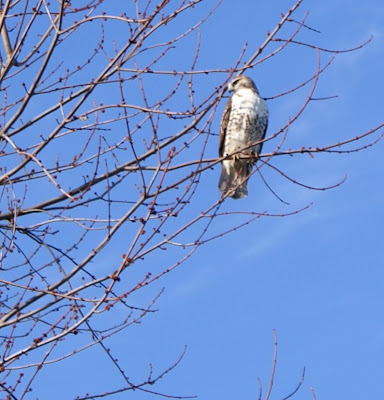 This one stayed put for 10 minutes while we and others
photographed it at John Heinz NWR outside Philly. And
Navy won the big game!
Posted by Warren and Lisa Strobel at 9:34 PM No comments: